Directive ISO 6789: 2003 and the calibration certificate

Laboratory
Directive ISO 6789: 2003 and the calibration certificate
24 April 2018 by Marco Grippa in Laboratory

Reference to the current standard, which will be updated by version 2017-Part 1

Static calibration of manual torque tools used for controlled tightening.
The standard applies to the torque tools listed below, in particular to wrenches with dial indicator dial and click type wrenches

Orientation of the calibration device

• Informations on the orientation depending on the calibration axis

Before calibration, it must be ensured that:

• For dial indicating tools, Type I: a preload up to the maximum value in the operating direction to be tested has been performed prior to testing and after the load has been released, the indicator or electronic indication has been set to “0”. For tests in any other operating direction, this procedure shall be repeated

• For setting torque tools, Type II: five loads were performed and released without measurement at the maximum value (nominal capacity of the tool) in the operating direction to be tested prior to the tests. For tests in any other operating direction, this procedure shall be repeated

• For torque screwdrivers or torque wrenches with T-handle, the force is applied within the limits shown in the following figure: 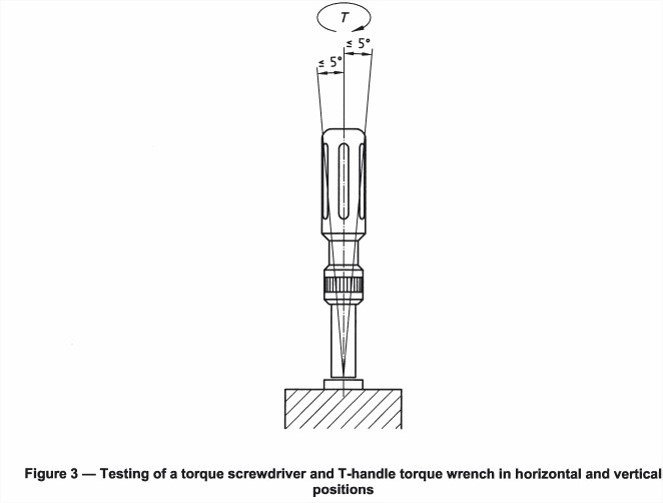 • The evaluation of deviations shall be made by the following formula:

• If the user does not use a control procedure, a period of 12 months or approximately 5 000 cycles may be used as an assigned value for the recalibration interval
• For the first recalibration the period of validity starts with the first use of the torque wrench by the user.

• The torque wrench shall be re-calibrated:
– if it has undergone an overload which is higher than that applied during the overload test
– after corrective maintenance has taken place; or
– after an improper operation which can have an influence on the metrological properties or the measurement uncertainty

– Part II of the new standard, while maintaining the verification points at 20 – 60 – 100% of the capacity, defines the methods to be used to calculate the uncertainty of a torque wrench, following the equations adopted by DIN-DKD, but with a very high number of tests.